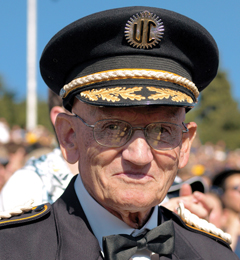 Even after Robert O. Briggs ’51 retired from his 24-year run as a beloved Cal bandleader, he would show up at Memorial Stadium band practices with a cup of coffee and a morning bun from Bette’s Diner.

Although Briggs died in 2008 at age 81, current Cal Band Director Robert Calonico ’76 says his teacher, mentor, and friend is “here in spirit.” He notes that Briggs (Berkeley’s first and only “band director emeritus”) is always discussed at band camps to ensure that each generation of Golden Bear musicians learns of the man who marched in four Rose Bowls.

More than 50 students and alumni visited Briggs in the hospital in the days before he died — sometimes serenading him with band favorites — and many more sent cards. In the first football game following his passing, the Alumni Band placed his uniform hat atop a ladder during “Hail to California” — the song Briggs traditionally conducted on Alumni Band Day. Football players wore “BB” for Bob Briggs on the back of their helmets.

Briggs grew up in Modesto, California, and was the great-grandson of the town’s co-founder. He attended Modesto Junior College before transferring to UC Berkeley in 1947. While a student, Briggs played the cornet and French horn in the heyday of Cal football under Lynn O. “Pappy” Waldorf — when Berkeley went to the Rose Bowl three times. Although Briggs had left Berkeley after graduation to serve in the Army band during the Korean War and then to direct Fairfield’s Armijo High band, bandleader James Berdahl invited him back to Cal to help fill out the band’s ranks by marching at the Brussels World Fair in 1958 and in his fourth Rose Bowl in 1959.

In his earlier days as director, Briggs was more reserved with students and was always addressed as “Mr. Briggs.” In later years, friends say he developed a more casual style and became known to band members simply as “Bob.” When Berkeley band members married (a fairly common occurrence), Briggs enjoyed driving them to or from their nuptials in one of his many classic cars.

Even those who knew Robert O. Briggs personally may not know that he generously contributed to Berkeley.

Even those who knew Briggs personally may not know that he generously contributed to Berkeley. He established the Robert O. Briggs Scholarship, awarded annually to support a student brass player, and the Robert O. Briggs Family Scholarships for upper and lower woodwind players and a percussionist. Briggs also bequeathed his IRA and annuity accounts to Berkeley to support Cal Alumni Association scholarships, athletics, Cal Performances, and, of course, the Cal Band.