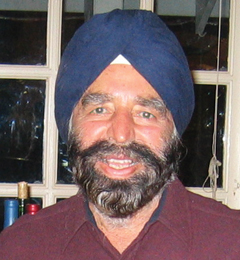 A 23-year-old Awtar Singh Ph.D. ’66 found himself constructing his country’s first large dam — the Bhakra Dam — at the request of India’s Prime Minister Jawaharlal Nehru in 1949.

Fresh from Punjab Engineering College, Singh was selected to visit the United States to observe dams under construction, learn about power plants, and apply that knowledge at home. “Wall-to-wall carpeting. Air conditioning. Kentucky Fried Chicken. It was heaven,” recalled Awtar, then 28 years old. “I promised my wife Teji I’d take her back.”

It took some time to fulfill the promise. Awtar returned to India as the senior engineer of the Bhakra Dam construction and then as chief of staff to the general manager of the dam. A young man at the top of his field in India, he decided to take a two-year leave to get his master’s degree in engineering at the University of Colorado. A promised stipend from the Indian government never came and Awtar found himself a broke graduate student in Boulder. He applied and was accepted to Berkeley for his Ph.D. — receiving “the red carpet treatment” and enough funding to make a home with Teji. “It was a fascinating time with the Free Speech Movement and Mario Savio,” said Awtar about Berkeley in the ’60s. “But we were the nerds.”

In 1998, Awtar Singh created the Awtar and Teji Singh Fellowship for graduate students from Punjab Engineering College who are accepted to Berkeley — benefiting 16 students since.

The couple did not have children of their own, but Teji became a Montessori teacher and enjoyed “more than 20 children every day,” said Awtar. Together, they built a life over five decades and looked forward to retirement. Sadly, in 1997, Teji died unexpectedly. Singh said he eventually learned how to do the laundry and find the grocery store. He spent a lot of time working and made his company even more successful. “That is when I said ‘I have no children. My wife is not here. I don’t even have a cat.’ I decided to be philanthropic,” said Awtar. In 1998, he created the Awtar and Teji Singh Fellowship for graduate students from Punjab Engineering College who are accepted to Berkeley — benefiting 16 students since. The fellowship increased in 2012, when Singh passed away and his IRA assets rolled over to Berkeley.

Shruti Malik M.S. ’01 says she was a first-year student at Punjab Engineering College when she clipped an article about Berkeley’s Singh fellowship from her local newspaper and saved it in her diary. “This article became my guiding light and sole inspiration,” says Malik, who received the fellowship and is now a California transportation engineer. “Getting the opportunity to pursue a master’s at Berkeley was a dream come true for me!”