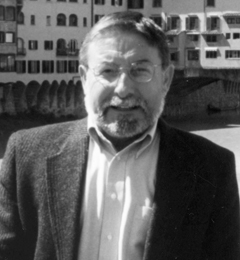 Born in the Bordeaux region of France, Steve Roger ’65 lived there until the age of three when his family “lost everything” in World War II. His mother brought him to San Francisco to build a new life.

Roger was accepted at both Harvard and UC Berkeley, but the latter’s affordability made the difference. He was able to manage Cal’s relatively low cost only by working and cobbling together a number of modest scholarships — “$100 here, $500 there.” The pivotal experience in his college career was the French literature major’s participation in the campus’s Education Abroad Program, which allowed him to return to Bordeaux and spend his junior year immersed in French literature and culture, visiting other parts of France and Europe during his breaks.

The experience transformed him intellectually as well as personally. After graduating in the top one-percent of his Cal class, Steve received several job offers. But the one that sparked his interest was from the national Centers for Disease Control and Prevention for a position doing fieldwork in the area of communicable diseases. He accepted the position primarily because he saw it as a way to make a positive impact on society. After five years working for the “feds,” he joined the California Department of Health Services. During his three decades there, he played a leadership role in the state’s response to many major health challenges, including the AIDS crisis. He retired from the department in 2002.

Because he never forgot how scholarships made his own education possible, Roger decided to fund two planned gifts, including a deferred charitable gift annuity that will ultimately benefit undergraduate scholarships at Cal. Because this type of annuity defers its first payment for a number of years, it can pay a higher annual income later. “I realized my income would decrease after I retired,” explains Roger. “These payments will really help me when I need them most.”

“I realized my income would decrease after I retired,” explains Steve Roger. “These payments will really help me when I need them most.”

Roger’s gift reflects his pride as a Cal alum, but also his sense of what it means to be an American. As a naturalized citizen, he believes strongly that he has certain fundamental duties: voting, paying taxes, serving on juries, and giving back to society. Giving to Cal is one way in which he accomplishes the latter.