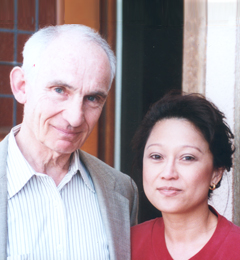 With the start of World War II, Walter Kaufmann ’56, J.D. ’61 and his family fled Nazi Germany for Havana, Cuba, and then the Bay Area.

After a year at San Francisco State, he transferred to Cal, where he “flowered.” After earning his bachelor’s degree in sociology, Walter left to study law at Cornell. He soon felt “homesick for Cal,” however, and he transferred to Boalt Hall after his first year. Armed with a new law degree, a passion for social justice fostered by his years at Berkeley, and knowledge of his family’s experience in Germany, he accepted a position with the Congress of Racial Equality (CORE). Walter was helping register black voters for CORE in Philadelphia, Mississippi, in June 1964, when the town was catapulted into the national headlines with the shocking murder of three young civil rights workers.

Eventually, Walter went on to do graduate work in sociology at the University of Wisconsin at Madison, earn a master’s degree in counseling psychology at San Francisco State, and receive a diploma in psychoanalysis from the Center for Integrative Psychoanalytic Studies. He spent many years teaching sociology at the College of San Mateo in Northern California, where he was dean of the Division of Social Sciences. At the same time, he had a private psychotherapy practice in San Francisco. His retirement from teaching in 1990 allowed him to pursue counseling full-time.

Having relied on a Walter Perry Johnson Fellowship to help him pay for law school, Walter Kaufmann had firsthand knowledge of the role private support plays in educational opportunity.

Born in metropolitan Manila in the Philippines, Jocelyn Kaufmann received her primary, secondary, and college education there from Maryknoll College. Like Walter, Jocelyn studied sociology, but she “never used it,” working instead as an executive secretary to the chairman of a Manila bank. After coming to the United States in 1985, she worked as the assistant to a Filipino businessman whose company manufactured computer chips in the Philippines. She met Walter in 1992, and the two were married three years later.

The Kaufmanns’ first two planned gifts to Berkeley established charitable gift annuities that allowed them to support the university while enjoying a guaranteed annual income and tax advantages. For their third planned gift, the Kaufmanns established a charitable remainder unitrust, which will provide an annual income as well as capital gains tax avoidance and an income tax charitable deduction. Jocelyn felt it was a good way to handle the couple’s share of some real estate belonging to a larger partnership that was in the process of dissolving; Cal’s Office of Gift Planning came up with a solution custom-tailored to their personal goals.