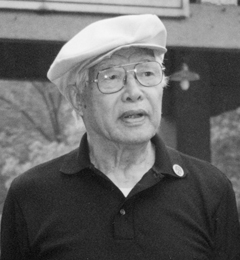 James Jan was born in Wu-han, China, in 1912. His older sister and three younger brothers all died at an early age.

His grandfather had become wealthy supplying wood and bamboo for furniture, but reversals in his family’s fortunes meant that James grew up poor. After a life of military service in China, he found a new way to serve others through philanthropy.

To trace Jan’s career is to see a life devoted to duty against a backdrop of modern Chinese history. At the age of 19, he entered Whampoa Military Academy, China’s equivalent of West Point. He later trained as a pilot, flying reconnaissance missions in the Second Sino-Japanese War (1937–45). When necessary, he braved enemy fire to survey battlefields on a motorcycle — a perilous practice that left him with a deep shrapnel scar. After ascending to the rank of major general in the Taiwanese Army, Jan retired and, in 1972, he joined his four children in the United States.

James’s decision to support UC Berkeley grew out of his strong sense of duty. In keeping with traditional Chinese values, he believes that “educating the next generation is the responsibility of the older generation.”

James’s decision to support UC Berkeley grew out of his strong sense of duty. Believing that educating the next generation is the responsibility of the older generation, he had a lifelong ambition to “someday to help poor students get an education.”

After consulting with the campus’s Office of Gift Planning, James contributed the proceeds from the sale of his Taiwan home to create a charitable gift annuity. Under the terms of the annuity, the university pays James an annual income at a favorable rate until his death, at which time the corpus of his gift will be used to support Cal.