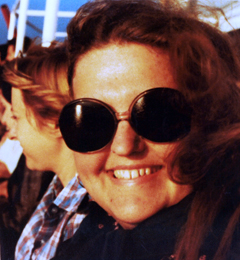 Throughout her childhood, the late Kathleen Miller Ph.D. ’77 witnessed her extraordinary mother, Arlene, devote her life to helping others.

Kathy, in turn, dedicated her career to working on treatments for deadly diseases that affect the poor in developing countries. Mother and daughter inspired one another. As an inner-city social worker, Arlene was available day or night. Arlene and her husband were also among 2,500 people in Milwaukee who took part in a 1965 civil rights march, braving bricks, taunts, and slurs. “I was put on this earth not to do things for myself but to do things for other people,” says Arlene. It’s an attitude that rubbed off on Kathy.

Long interested in science, Kathy earned her Ph.D. in immunology from UC Berkeley and built a career focused on neglected diseases such as malaria and schistosomiasis, which affects 240 million people worldwide, primarily in poor communities.

Kathy’s career and a passion for world travel took her around the globe. But her fondness for Berkeley brought her back to work at Lawrence Berkeley National Lab and, later, Chiron Corporation. Kathy made important research breakthroughs, but her potential was cut short by a genetic heart arrhythmia that took her life at age 44.

This year, two Kathleen L. Miller Fellows are receiving support for their microbiological studies of diseases that disproportionately strike poor populations globally — exactly the kind of work that Kathy was passionate about.

Kathy’s many friends and colleagues set up a memorial scholarship in her honor through the Association for Women in Science, where Kathy had served as a board member. The scholarship supports female community college undergraduates in the East Bay who are pursuing the sciences.

This was the spark that led Arlene to establish the Kathleen L. Miller, Ph.D., Endowed Fund in Biological Sciences. The fund supports students in the Henry Wheeler Center for Emerging and Neglected Diseases, with an emphasis on encouraging young female scientists. In addition to supporting the fund with outright gifts, Arlene has included a bequest in her trust and set up a charitable gift annuity — both benefitting the fund. The annuity provides Arlene with income for the rest of her life. It also simplifies her finances by compiling multiple sources of income into one dependable income stream.

This year, two Kathleen L. Miller Fellows are receiving support for their microbiological studies of diseases that disproportionately strike poor populations globally — exactly the kind of work that Kathy was passionate about.

“Kathy’s dream was to make an impact on the treatment and eradication of deadly diseases in the developing world,” says Arlene. “I think she should get what she wanted, even if it has to be through the work of other young scientists.”