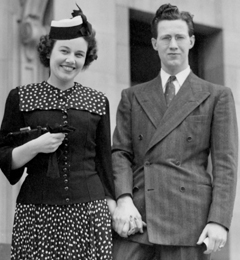 “Even though you’re not an alumnus, we’re happy you found a home at Cal.”

With these words, former Chancellor Robert Berdahl aptly characterized the deep attachment the late Bill Ford felt toward Berkeley for more than six decades. Bill’s connection to Cal — and that of his late wife, Grace ’37 — has always been, first and foremost, a family one. Bill was born in 1915 on a farm near Trenton, Missouri. Upon his high school graduation, he headed to California; within a month of his arrival, he was off again, working as a bellhop on the Lurline ocean liner bound for the South Pacific and Asia. “I was from a small town,” he explains. “I didn’t know anything. But I learned about people and real life.” In 1935, after two years of far-flung locales, Bill took a job as a salesman for a Western Auto Supply store in Oakland.

In 1939, in a night class at Merritt College, Bill met Grace Haldeman. Born and raised in Oakland, Grace had graduated from Cal in 1937 with a degree in art. While she found her major personally fulfilling, it didn’t help her find employment, so she began attending night school to study economics. She and Bill were married on May 16, 1942, just after Bill was drafted by the Army Air Corps. The Corps sent him to a technical school in Sioux Falls, South Dakota, but he “flunked out” due to hearing loss incurred, in part, by high-decibel exposure to Morse code.

Bill and Grace both went on to have successful careers — she with the Oakland School District and he with Chevron — before retiring in the early 1970s. All the while, they maintained a close connection to Cal. As a Berkeley student, Grace had loved watching Cal sports, especially football, and she imparted that love to her husband; Bill attended every home game from 1946 to 2010.

As Bill Ford put it, his relationship with Berkeley was “one of the most important things I ever did.”

The couple always intended to leave a significant bequest to the University. “What better place?” they said to themselves. But it was only when Grace was diagnosed with Alzheimer’s in the late ’90s that the two felt a new urgency about supporting “their” alma mater. Funded by their bequest, the William and Grace Ford Undergraduate Scholarship Match was a dollar-for-dollar match for new endowed scholarship gifts of $100,000. Ten of them are athletic scholarships, as befits these avid fans. The scholarships, with the match, total $8 million.

As Bill put it, his relationship with Berkeley was “one of the most important things I ever did.” Bill wished to open the arms of his Cal family as wide as possible, so it was no surprise when he cited his primary reason for his generosity: “Grace. She loved the place. She probably could have gone to school there the rest of her life.”