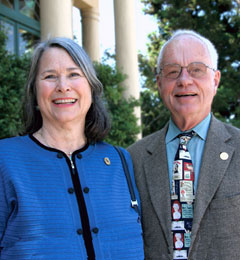 We believe every qualified kid is entitled to an excellent education.

Peter ’61 and Robin ’65 Frazier are the kind of alumni who started giving back to Cal practically the day they stepped off campus — in ways that will be felt by generations of remarkable Cal students. “My family has a long history in this place and I love it,” says Peter, a third-generation Golden Bear whose grandmother played on the Cal women’s basketball team in the 1900s and whose son played on the Cal rugby team in the 1990s. “I thoroughly believe in UC Berkeley,” adds Robin, explaining why she and Peter have generously supported scholarships as well as The Bancroft Library and the Young Musicians Program.
A few years ago, the Fraziers donated two condominium units to a charitable remainder trust. The University sold the properties and put the cash in a diversified stock and bond portfolio that pays the couple lifetime income. The remainder will provide critical endowed funds for Berkeley.

This is a slam dunk,

says Peter, an investment manager and a founding trustee of the UC Berkeley Foundation, praising the immediate tax benefits as well as Berkeley’s handling of the real estate gift.
A political science major and Sigma Nu fraternity member while at Cal, Peter says the state paid 80 percent of the University’s costs when he was a student. He is dismayed that state funding has dwindled to just 16 percent.
As co-chair of the Class of 1961 reunion committee, Peter encourages his classmates to join him in supporting and protecting the University. “Now more than ever,” he says, “it needs it.”