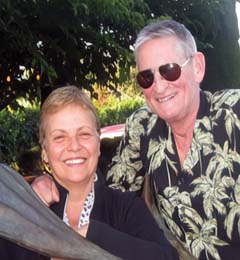 Supporting ‘the hearts and hands’ of research

Robert Knight and his wife, Donatella Scabini, grew up on opposite sides of the Atlantic Ocean. Though he lived in New Jersey and she in Italy, both came from working-class families and were the children of fathers whose educations were interrupted.

“My dad had to drop out of school in eighth grade — he went to work after his dad died,” says Bob, a psychology professor at Berkeley for the past 22 years and the former director of the campus’s Helen Wills Neuroscience Institute (HWNI). “But he had simple advice for my brother and me: ‘Now that you have an education, keep going to school until you can’t stand it anymore.’”

Bob became the first in his family to go to college, eventually earning degrees from the Illinois Institute of Technology and Northwestern. At Illinois Tech, he received a “full ride,” while also holding down a job at the campus gas station to help pay his bills. Similarly, Donatella worked as a teaching assistant while studying at UC Davis, where she and Bob met.

After many years working at Davis, the couple headed to Berkeley. Bob continued his teaching career and established his lab, which focuses on attention and memory, neuropsychology and physiology, and cognitive neuroscience.

In addition to their work in academia, Bob says the 2012 sale of a startup company that he co-founded “really solidified our financial stability.” It enabled the couple to think about paying it forward with an estate gift to their shared academic home. Seeing firsthand how private philanthropy can ease the financial burdens of graduate education, they agreed to split their gift to support graduate students evenly between Berkeley’s psychology department and the HWNI.

Their gift, named in honor of Bob’s parents, addresses a vital need that comes up routinely in Bob’s cognitive neuroscience research lab. “I worked closely with grad students in Bob’s lab over the years,” says Donatella, who has a Ph.D. in neuropsychology and ran Berkeley’s neurological patient research program for 22 years.

“It’s important that they have the ability to work and not worry about taking loans, particularly when they come from socioeconomic backgrounds that do not readily provide them funds."

While planning their gift, both Bob and Donatella hoped that it would encourage other faculty to consider making similar gifts to Berkeley. And not surprisingly, that’s exactly what happened. “Three people we know are now changing their wills — two are faculty that I know personally,” Bob says. “One friend told me, ‘I saw what you did, thought it was cool, so I’m going to do something similar.’”

The relationship that the couple has today with the lab’s psychology graduate students and neuroscience Ph.D. candidates is close-knit. For the past 20 years, Bob and Donatella have even arranged an annual camping trip with members of the lab, strengthening that bond further.

That connection underscores the pride that Bob has for the dozens of talented students he has mentored over the course of his career. “The grad students are the hearts and hands of the lab,” he says. “They collect the data and are doing the work. If you’re a good mentor, you guide them to pursue things that inspire them. I hand them the keys to the Ferrari, tell them to drive as fast as they can, and I provide the guardrails.”