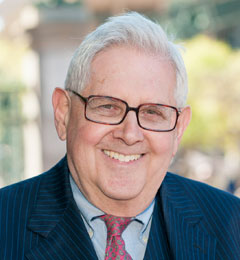 An East Coast native, Richard first came to campus for a teaching credential and then returned for his doctorate in biochemistry and bacteriology. He also plunged into the rough-and-tumble world of journalism. Along with becoming an editor and investigative reporter for The Daily Californian, he produced an award-winning documentary, The Curious Case of Vitamin E. Broadcast nationwide, Richard’s film explored the risks and benefits of large doses of vitamin E, which was discovered at Berkeley in 1922. At The Daily Cal, Richard prided himself on hard-hitting work and honed writing skills that he uses to this day.
Richard credits Berkeley with many pluses — a world-class education, creative inspiration, and a lifetime of fond memories. I can’t tell you how much I enjoyed and got out of the experience,” says Richard, the founder and president of Biomed Inc., a successful biotechnology and publishing company in Concord, California.
He’s demonstrating his gratitude with a generous bequest that will support the excellence of Berkeley’s professors by establishing an endowed faculty chair in the College of Natural Resources, where he benefited from inspiring teachers and mentors.

Berkeley gives a person the freedom to innovate,

says Richard, who used his last $700 to launch his company in 1981 from a rented room. Today, Biomed has nearly 50 employees and operates globally. “A totally unique experience awaits anyone who studies at Berkeley,” says Richard. “It’s paid huge dividends.”