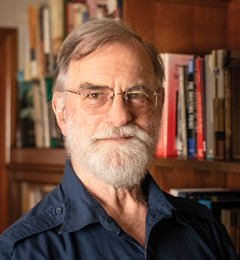 UC Berkeley has some of the world's greatest libraries, and they remain an important resource for me.

As a child, Richard Hodges '72 often had a book or musical instrument in his hands. His parents were teachers and encouraged him to read and play music from a young age. That early immersion had a profound impact on his life: not only did he skip four grades in school, he also developed a lifelong passion for philosophy, music, and especially mathematics.

As a graduate student at UC Berkeley, his fascination was further cultivated by professor and pioneering mathematician Hans Joachim Bremermann, an early force in artificial intelligence.

"Hans was a great mentor to me," recalls Richard, who, when not competing on Cal's judo team or ensconced in one of the university's libraries, was also teaching courses on artificial intelligence in the Department of Electrical Engineering and Computer Sciences. "He encouraged me to pursue what I wanted in this new field."

That intellectual freedom galvanized Richard's technological innovations and led to a successful career in digital and electronic engineering and artificial intelligence, particularly applications related to sound and music.

He founded several startups, including ACT Networks, which became a publicly traded company, and has six patents in his name for technologies related to machine learning and sound processing. But something deeper than stock options drives his desire to create.

"The most essential human impulse is to share one's inner life," says Richard, who, in addition to playing bassoon in three Bay Area orchestras, is a published writer, poet, and world champion in judo. "If you can share it in a way that raises people's consciousness or makes them happy, it gives them a sense of the grandeur of the universe. I try to do all those things."

That includes giving back to the institution that continues to help raise his own consciousness, the University Library. Thanks to early investment in Apple, Inc., he created a charitable remainder trust, funded with securities, that will ensure the Library remains a beacon of intellectual light of others.

"UC Berkeley has some of the world's greatest libraries, and they remain an important resource for me."