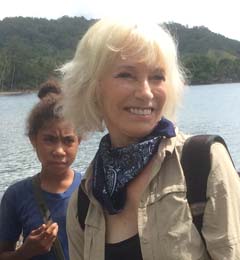 If I can make a difference to students, that's where my heart is.

Jeanne Harrah-Johnson ’78, C.Mult. ’79 is fascinated by folklore. She traces her decades-long curiosity back to Berkeley.

“The classes were stunning,” says Jeanne, who discovered folklore — and her desire to explore the beliefs and stories that distinguish a community — as an anthropology major.

“It wasn’t necessarily the large issues of cultural anthropology that grabbed me,” she says. “It was the attention to details of everyday life.” Jeanne was particularly captivated by Professor Emeritus Nelson Graburn and the late Professor Alan Dundes. She took graduate seminars, pored over objects in the Phoebe A. Hearst Museum of Anthropology, and conducted in-depth research.

Originally from Willits, California, Jeanne loved the Berkeley campus ever since roaming it as a child. After Berkeley, she went to Indiana University, where her doctoral dissertation examined the Kentucky Derby’s rituals. She later worked as an oral historian, coordinated a folklife program for the Nevada Arts Council, and taught courses at the University of Nevada, Reno, and Truckee Meadows Community College.

Forever grateful to Berkeley, Jeanne made a gift from her and her husband Jerry Johnson’s estate for fellowships for graduate students in folklore and anthropology.

Recalling the challenges of working full time while earning her Ph.D., Jeanne hopes to ease the financial burden for others working in her field.

“This is where it needs to be,” she says. “If I can make a difference to students, that’s where my heart is.”