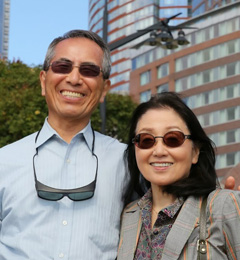 A year ago, Hisashi Kobayashi took up piano lessons as a way to keep his mind nimble. The former dean of Princeton University’s School of Engineering had started with Chopin, but on the cusp of his 80th birthday in June, he decided to tackle something more complex: Beethoven’s inimitable “Moonlight Sonata.”

“I always liked the piano,” says Hisashi, who grew up in Tokyo during WWII, “but in my generation, only well-to-do families could afford lessons.”

Learning to play the piano takes discipline and patience — attributes he says he developed early in life from his older brother, Shoshichi, former chair of the Department of Mathematics at UC Berkeley who is considered a luminary in the field of differential geometry.

“My brother, who was six years my senior, was the most influential person in my career,” says Hisashi, who remembers him fondly as a gawky bespectacled introvert who would bring his math books to the dinner table. “He spent a lot of time trying to make me a good mathematician. He was very demanding, but I respected him, so I did what he suggested.” This included learning English by listening to evening radio programs and solving algebraic equations that Shoshichi assigned to him every week, despite being away at college.

His tutelage paid off. Both he and Hisashi became the first in their family to attend university and travel abroad for graduate study. Though descendants of Samurai, they came from a family of modest means. It was an era when only the wealthy could afford to send their children to college. Well-earned scholarships and fellowships ensured that these bright young men could earn their doctorates from top institutions: Shoshichi from the University of Washington (after a year of graduate study in Paris and Strasbourg on a French scholarship), and Hisashi in electrical engineering from Princeton.

It’s this bridge to success that Hisashi wants others to have.

To honor the memory of his late brother, who died in 2012, Hisashi and his wife, Masae, along with Shoshichi’s daughter Sumire and her husband Phil Chou, established the Shoshichi Kobayashi Memorial Fund at Berkeley to support graduate student fellowships in mathematics. Thanks to generous support from Shoshichi’s former students and friends, together with a matching gift from Phil’s employer, Microsoft, the fund has grown to support two to three fellowships per year. Hisashi hopes to increase those awards.

Recently, through a blended gift that includes a charitable gift annuity, distributions from his IRA, and a generous bequest, Hisashi and Masae — who met while ballroom dancing in college — have ensured the fund will be endowed in perpetuity. And the gifts benefit them as well. After selling their vacation home in Vancouver, British Columbia, they used a portion of the proceeds to fund the gift annuity, thereby offsetting capital gains taxes, earning income for life, and bolstering a charity dear to their hearts. Now that’s a pretty good equation!

“I never thought of math as beautiful, but my brother did. He had a gift.”

The memory of Shoshichi, and the deep impact he had on Hisashi's life, resonates deeply with him, much like the notes of Beethoven he conjures on his piano.