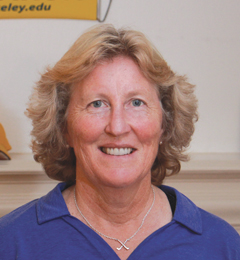 In 2015, Cal women's field hockey adopted a motivational mantra to get through tough times: "Lift while you climb." In other words, help others while you help yourself, and everybody wins. Former Berkeley field hockey star Emily Risberg '81 reflects this same spirit of compassionate play in her lifestyle and actions, and she credits former Cal coach Donna Fong '61 (1976-94) for helping to instill that ethos.

"She opened up my world in a way that I'm still benefitting from today," says Emily, who is honoring Donna's gift of guidance by establishing a field hockey scholarship in her name. "Donna's belief in me was my seat of confidence. I admired her coaching style. She had this calmness about her, and her technical knowledge was off the charts. She brought out the best in her players."

Emily, who now coaches field hockey herself at Saint Francis High School in Mountain View, first met Donna during a summer sports camp when she was a teenager. It was a challenging time in Emily's life; she was dealing with a devastating loss of her 11-year old brother, who died of leukemia when she was 14. Sports provided distraction and respite from the trauma of losing the person she called her best friend.

"He was my buddy. My first true love. We did everything together. I had to work out a lot of issues. Sports helped me find my Zen."

Around that time, Title IX -- a game-changing congressional amendment to the Educational Act that prohibits sex discrimination in federally funded educational programs -- had just passed, and collegiate women's sports blossomed across the nation. Emily's spirit did too the summer that Donna taught her how to play field hockey. At the confluence of these watershed moments, Emily's future was borne aloft. She was inspired to apply for sports scholarships, and Cal was there with open arms.

I had no idea when I first met Donna that she would one day be my coach, but once I got to Berkeley, she really helped me grow -- in self-reliance, confidence, leadership. I was not ready for college...I was scared to let go. She believed in me.

"Donna took our team from 'raw' to second in the nation -- in four years!" recalls Emily. "That's amazing."

Today, Emily continues her role as a valuable team player. With husband, Jeff, their gifts to the university include the Donna Fong Scholarship and the funding of a charitable remainder trust. These gifts will not only earn her a family income, they will also help support Coach Instead's limited operating budget.

"Emily's gift reflects her passion for the program and the perspective of appreciation that I think we all acquire over time," says Coach Onstead, who's in her twenty-second year of coaching. "She sets an amazing example for everyone."