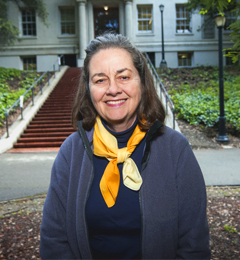 I'm taking a chance on their future.

Diane Scarritt M.S.W. ’73 grew up in Indiana, studied at Brown University as an undergraduate and Berkeley as a graduate student, and was a social worker for decades. But dig past the bullet points and you will find a woman driven by uncompromising compassion and selfless generosity.
Diane says the excellent education she received from day one is her life’s greatest blessing. She chose Berkeley’s School of Social Welfare because of its top national rankings and specializations that reflected her career aspirations. She received full funding and exposure to inspiring professors, a well-rounded curriculum that included family law, policy, and research, and clinical practices that were sensitive to the unique needs of underserved populations. Since then, she has dedicated her life to serving children and families in San Francisco and the East Bay.
When Diane received an unexpected inheritance, she realized that because she has no heirs, she needed to define what was most important to her. She made a bequest to Berkeley that will support social welfare students who, like her, wouldn’t be able to afford graduate school.

says Diane. "I’m taking a chance on their future."