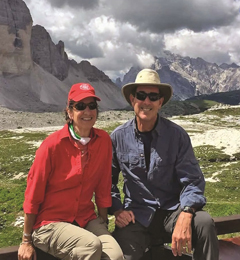 A first-year graduate student studying entomology, Steven Balling '74, Ph.D. '82 was in search of a like-minded mentor. He had just completed a bachelor's degree in conservation of natural resources, a new interdisciplinary major inspired by the environmental movement. His future wife, Carolyn '74 — whom he'd met on a botany class field trip to Point Reyes — had left for a two-year stint in Montana with the Girl Scouts of America while he stayed in Berkeley and secured a job in the entomology lab where he studied the invasive killer bee.

"Nobody else would hire me," recalls Steve, laughing. He applied to the grad program, and soon met his future mentor, Professor Vince Resh, then a junior faculty member not much older than him who had just started teaching freshwater ecology at Cal.

"I took one of his classes, and we hit it off," says Steve. "I knew I wanted to be an entomologist, but I wasn't sure in which field."

Within the year, he became Resh's first Ph.D. student, studying non-toxic mosquito control, using an integrated pest management (IPM) approach to pest control. Their research aligned so well — Vince focused on the ecology of aquatic insects — that Steve stayed on as a postdoc in his lab.

When Steve moved on, he found the agricultural industry had no yet embraced IPM, and he immediately knew what his role would be. Over a long and successful career with Del Monte Foods, Steve help revolutionize the use of IPM in agriculture.

"Steve did fabulous work on controlling mosquitos in an environmentally friendly way," recalls Vince, who today continues to mentor graduate students in the Department of Environmental Science, Policy & Management at Cal.

After some cajoling, Carolyn returned from Montana in 1976, the two married, and Vince became not only a mentor but a lifelong friend to them both, the three of them fixtures at Cal football games.

"Steve and I had VW bugs, and we tailgated with Vince and his lab for years," says Carolyn, who was then working locally for the Girl Scouts. "At the end of the party, we'd just close the hood and we'd be good to go! I think we only missed two games."

"Although neither of my parents went to college," says Vince, who established the memorial fund 12 years ago, "they were great believers in education. My wife and I wanted to help support graduate students. This gift will enable the fund to continue."

"We always knew we wanted to give back," says Steve. "You sink a lot of roots into Berkeley. It stays with you."

Adds Carolyn, "We wanted to fund graduate student scholarships because when we went to Cal, we came out without any debt."

Both agree, however, that their inspiration runs deeper. "Vince is a good guy. He's family."