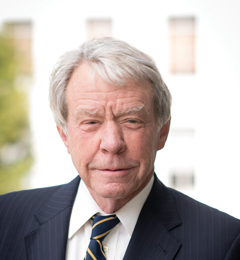 Berkeley's always been my North Star. This is my place... I'm glad to give back.

As an undergraduate, Carl Stoney '67, J.D. '70, M.B.A. '71 was captivated by Cal spirit and traditions - from wearing white at football games to painting the Big "C" on Charter Hill. He was active in student groups and his fraternity, Phi Kappa Psi. As commencement neared, Carl, who was earning a B.S. in business administration, didn't want to leave. The solution? "I applied to Berkeley Law," he says. "I wasn't sure about being a lawyer, but I figured I could get into Boalt Hall!"

His parlay paid off. Fifty years later, Berkeley remains the cornerstone of his life - as do the lifelong friendships he cemented here. In 2015, Carl and six fellow alums - including several fraternity brothers - scaled Mount Kilimanjaro together. But his higher purpose continues to be Cal's own ascension. While Carl was building a successful law career, he also forged a legacy of service and philanthropy to the university. An affable and charismatic leader, he's been a past president of the Cal Alumni Association (CAA), served on the UC Board of Regents, and remains an emeritus trustee for the UC Berkeley Foundation. As co-chair of the Campaign for the New Century (1993-2000), he helped guide Berkeley past a record-breaking billion-dollar mark.

What drives him? "Simply put, Berkeley is my family," he says.

To honor this relationship and celebrate Berkeley's 150th birthday, Carl made a generous gift in his will that broadly supports campus needs, as well as Berkeley Law and the Haas School of Business, the University Library, Cal Baseball, and the Achievement Award Program, sponsored by CAA. Carl also recently joined the Builders of Berkeley, an illustrious group of benefactors that includes early philanthropists like Elizabeth Boalt. In 1906, her gift funded construction of Boalt Hall. With his name now etched on a granite monument near Doe Library that honors all past Builders, including her, Carl's story comes full circle. Now it's his turn to be recognized as a cornerstone of UC Berkeley's life.

"Berkeley's always been my North Star," he says. "This is my place. I felt is as early as freshman year. I'm glad to give back."